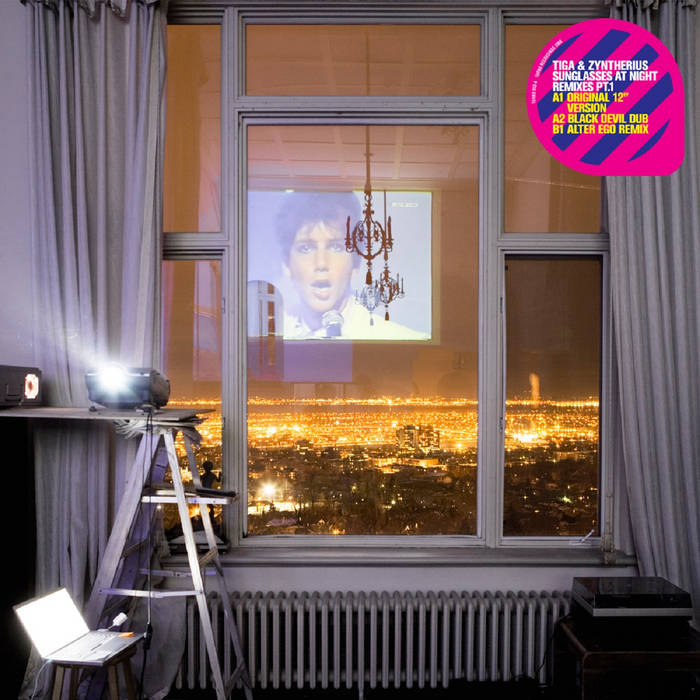 stfn_ Because Alter Ego remix is incredible... I'm very happy to have finally this vinyl!

Luck is everything, and it only takes an instant for your life to become your dreams. The fact that my life was changed, altered, and ultimately bettered by covering an MOR Canadian rockers 80’s pop tune is a quirk of destiny that gives me faith in the magical comedy that we call existence. This is the short story of how the shit went down.

It was the winter of my discontent. I was supposed to travel to India with my family for Christmas 2000, but was unable to go for personal reasons. Upset but determined to make the most of the situation I invited Jori Hulkkonen to DJ with me at my club (SONA) for a NYE party. Jori had done a mixCD for Turbo and we had cultivated a fine friendship based on ridicule, shared 80’s obsessions and ridicule. I had a small home studio that was gathering dust and producing nothing more than frustration; and I threw out the idea (I think I did, although maybe he did) of “making some tracks”. I didn’t know what I was talking about. My own creative career had followed a typical early 90’s trajectory: houseclubs-ectasy-techno-rave-DJ-travel-raver-promoter-radio-recordstore-nightclub impresario etc… all successful ventures that, at the turn of the millennium, had led me to a position of relative affluence and respect. But the elusive jewel in the crown was production; and this block was slowly destroying me. Then came the J-fool.

My memory is bad. In school it was perfect, but it’s been eroded by a potent cocktail of reefer, airports, timezones, sleeplessness, computers and time. Now, my memory is not to be trusted. I’ll try my best: i think the show went ok. Jori probably played a few records I loved, and a lot that iI hated. It was very cold. New Years Day came, I think he was sleeping at my place. I had an MPC, a Nord Modular. an 808 and a JUNO, and a puppy named Uma. Recently, at a small record store in Calgary of all places, I had bought a copy of ‘Sweet Dreams’ by Miss Kittin & The Hacker. I thought it was incredible. It’s hard to imagine now, but at the time the idea of covering a pop song in a techno style seemed interesting. This is before the world went crazy and eclectic. So we decided to try a cover.

I don’t remember details of the day. I had no intention of “singing” but I couldn’t really do anything else, so that became my job. I also had to walk Uma, make tea, take phone calls, make jokes. Jori did most of the work. We tried a criminally poor cover of “When Doves Cry” which thankfully is lost to all mankind. We did a version of “Small Town Boy” with falsetto singing so bad that if you could distill the sound into a liquid it would be the pure essense of “embarrassing”. We did a midi-file based cover of New Years Day, which I still love, that came out on an old Turbo comp. And then (I think it was last) we did Sunglasses At Night. Corey Hart was a Montrealer, it seemed fitting. Our lack of sample memory in the MPC combined with my hesitancy to sing complex notes (or ANY notes for that matter) is what resulted in the “genius” of eliminating the bridge and pre-chorus. I remember Jori thought it was amazing. I didn’t really like it. Score one for Zyntherius.

I remember going to my record store , DNA, which was just on the corner and playing it: the first of hundreds of “listen to my new track” sessions….. my first taste of the cold sweat of public testing, and the sheer horror of hearing MY voice on speakers. I hated it.

A few months before that day in studio i had done a mixCD called Mixed Emotions, which is still one of the best things I have ever done: it featured an “electro-funk” cd and my face on the cover. Both attracted the attention of DJ Hell in Munich, who of course at the time was a hero of mine. I had a contact thru licensing a song from them, so I think I sent him the sunglasses demo. He fell in love as well. I still didn’t like it.

The rest of the story is like a montage in a movie, albeit a small film, Hell came to montreal, burned dubplates, played 6 times at Love Parade, SAN got huge in germany, , ended up selling a quarter million, doing TOTP, and being one of the big “electro” anthems of the period. I got to ride my own
coatails all the way to where i am now. All my dreams came true, including the one about being voted #41 on the DJ top 100 list.

I still marvel at how easily it could’ve NOT happened: My dog stepping on the power switch a little earlier, or Jori getting tired, or the phone ringing at the wrong time. And I cant help but wonder how different my life would have been. While I was never a huge fan of the record I will say that
it was a very pure creative effort, in its own way a real punk track: two friends making something without any label or plans or scene……and crucially without any expectations. To spend 90 minutes on that, in a vacuum, and to then feel your entire life altered by the results…. that
is the magic of pop culture, and testimony to the awesome transformative power of ……. the Roland Juno-60.

Love from Montreal, and love to Jori Z and a special shout out to Hell and Josef.

When I was a child I dreamt about being a god.
When I grew up I realized I could become one.
In 2000 I noticed that the post for the god of synthesizers was not taken. I didn’t even have to apply for the job. No real god would have to do that. I just declared myself as ZYNTHERIUS – the god of synthesizers.
Nowadays I’m feeling much better, but occasionally I still get the urge.

Which is why you should be aware of the wrath of Z and respect the holy Oscillators.